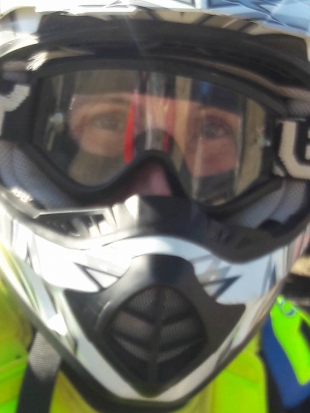 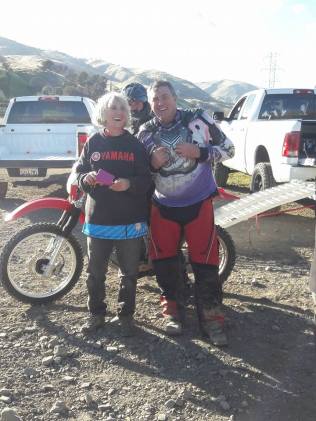 Having a good time on New Years Day

Me on my CRF

OK so I have decided to try to explain what happened to me the other day while I was riding at Carnegie. I don’t know if you can describe a thing like that in words, but I will try. You mountain bike riders won’t understand because you don’t play in the same kind of terrain. We frolic high up in the steepest hills.

I was going up the Water-tower hill climb, and when I started to lose speed at the top, I didn’t feel like shifting down and keeping it pinned. So I slowed down and started to ride off to the side. I must have lost concentration for a split second because I suddenly found my front wheel pointing straight down a deeply eroded gully that had been carved out of the hillside by the recent big storms. I thought I was going to die when I first saw where I was heading. It seemed like a long way down to the bottom.

There were no trails or tracks of any kind and the drop off was inter-spaced with huge ruts and ridges. I was hitting them one wheel at a time and after surviving one I dropped into another at speed and so on down the hill.

I couldn’t use my brakes much for fear of a front flip and a header down to the bottom. I was totally out of control; sometimes with neither boot on the pegs, but mostly squeezing the bike with my legs to keep it from flying out from underneath me. I kept my hands firmly on the bars trying to steer the bike straight down through the ruts. I had to shift my weight back and forth like I was riding a bicycle down the steep, eroded hillside. It was a wild ride and the only thing slowing me down were the ridges that we were hitting one after another, kicking my back end out from side to side.

When I reached the smooth part at the bottom I thanked god for my good fortune and did not even try to look back and see what monstrosity I had gone through. Someone must have been looking out for me that time. Whoopee…

I also have to thank of Joel at Burkett at 707 suspension who re-valved my suspension. He made it so it could absorb motocross type obstacles and still work off road. I would never have gotten through without crashing with the stock suspension. I still hurts in my chest cavity, back and shoulders from the crash that never happened.

This entry was posted in Carnegie. Bookmark the permalink.

2 Responses to A Close Encounter