By the end of this season’s Round 7, the TrialGP Czech Republic, he had won an overwhelming 7 of 9 trials, and finished second and third once. His championship victory comes before the season’s final round in Italy on September 17.

That success is the icing on top of his eleven years with the Repsol Honda Team, during which time he has won twenty-two World Championships. At 29, Toni Bou has a spotless track record, which improved this season with his victory in the 2017 World Championship.

Toni Bou was born in 1986 in Catalonia, Spain. His career as a rider began with bicycle trials when he was eight years old. After winning the world championship in this category in 1999, Bou switched to motorcycle trial riding.

Toni Bou is in a league of his own. He has already accomplished more than any other trials rider in history. Hopefully we will be able to watch him add more world titles to his resume. I wish that my replica HRC’s Montesa COTA 4RT was a factory bike and could leap tall buildings in a single bound like Toni Bou’s Montesa. Yea right; in my dreams… 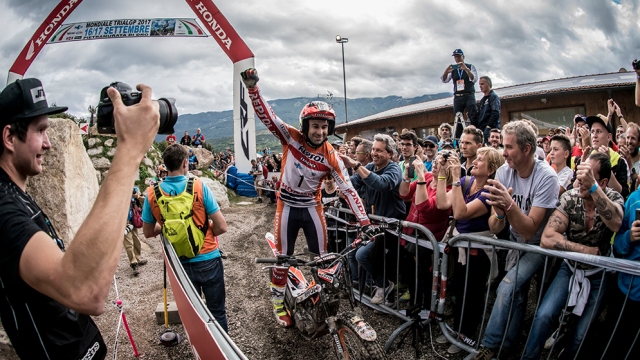 This entry was posted in Racers. Bookmark the permalink.